The town of Assisi was liberated on 17 June 1944 by 1 Battalion Argyll and Sutherland Highlanders of 8 Indian Division
who had worked their way up to Umbria from the battlefield at Cassino.

Where did the other 940 men lose their lives?

The official website of The Commonwealth War Graves Commission states that

'burials were brought in from the surrounding battlefields'.

This website explains where these battlefields and the temporary cemeteries associated with them were. 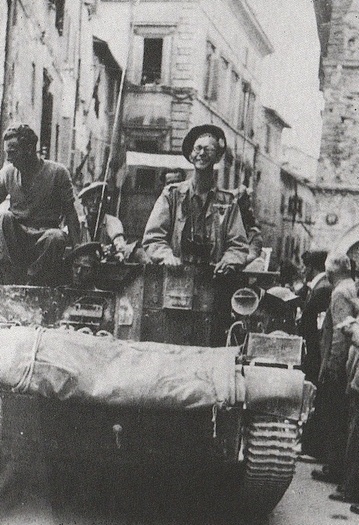 In September 1944, when the battle to liberate in Italy had moved north to the Gothic Line, this cemetery, known at the time as the British Empire Military Cemetery, was opened. Over the following year casualties were brought in not only from the Umbrian battlefields on the Trasimene Line and along the Tiber valley but from some neighbouring parts of Tuscany and Lazio and from as far afield as Emilia Romagna to the north and Abruzzo to the south.

The Commonwealth War Graves Commission has now released the CONCENTRATION REPORT FORMS for this cemetery, and with the exception of some casualties for whom no concentration form has been reproduced on their website it is now possible to find out exactly where each soldier or airman was initially buried. Not all the men were killed in battle: many died in an  advanced dressing station, field hospital or in one of two General Military hospitals, one of which was set up in Assisi (General Hospital no. 5, operational from August 1944 until April 1945) and Perugia (General Hospital no. 58, operational from October 1944 until May 1945).  6 British Armoured Division had its own temporary cemetery in Perugia. (See following page) A few of the men brought in to the War Cemetery were escaped prisoners of war, some of  whom had been shot by their captors or had lost their lives when fighting alongside the partisans.

To find a Concentration Report Form visit the CWGC website, choose a cemetery, enter the person's surname, click on his details when they come up and then click on the concentration form option.  The form can then be downloaded.  cwgc.org

The Concentration Report Forms refer to maps used by the Allied Military Forces. The forms, which list the servicemen by their regiment, army number, surname and initials, rank and date of death  give  the final cemetery's SHEET NUMBER followed by its MAP REFERENCE. Until July 1945 the Map Reference given for Assisi War Cemetery was 878846, but this was contested in August 1945 and by October the more accurate reference 867852 had been adopted.

A column on the concentration report form headed 'Previously buried at' gives the MR (Map reference) for the temporary cemetery from which the serviceman was transferred to Assisi.  Sometimes the six-figure reference is prefaced by a letter which indicates the compass point - e.g. W 820115. If the serviceman was brought in from an area outside the Assisi Sheet (123)  the GRID REFERENCE is prefaced by the appropriate SHEET NUMBER.
Here are some examples:

This example shows the original Map Reference for the Assisi Cemetery, which has been crossed out.

This sheet shows the Sheet Number and  amended Map Reference for Assisi, the Sheet Number for the temporary cemetery  and its  Map Reference.
Finding the location of the temporary cemetery using the Map Reference
Italian military maps do not use the Grid system which is found on Ordnance Survey Maps and so in order to locate these temporary cemeteries it is necessary to use a web site which converts the map references into places,  which are then shown on maps produced by Google.  The website is:
http://www.echodelta.net/mbs/eng-translator.php#
When the website comes up you need to scroll down the box showing various grid systems and click on Italian North Grid.

You will then need to select the map appropriate for your research.  Where Assisi temporary burials are concerned the map is  ww  for the more southerly part  of Umbria and  wr for upper Tiber Valley.  For Emilia Romagna the map is wm. For example, to locate the Assisi War Cemetery you will need to put ww867852 into the box.  A map will then appear with a red circle.  Click on the + sign to enlarge the map and then click on the satellite box to see the area in which the temporary cemetery was located.

The following  pages of the website contain maps showing the location of the temporary cemeteries and  lists  showing their  MAP REFERENCES.   This enables you to  enable you to cut out the conversion step.  There is also information about where the divisions and regiments which fought in the areas shown on the maps buried their dead.